Old joke: What do you call a person who follows musicians around? A drummer.

One more: What do you call a drummer who’s girlfriend just dumped him? Homeless.

But I bet you Alex Van Halen, Art Blakey, Dave Grohl, and that guy from Tool got called ‘Sir’ by their limo drivers. 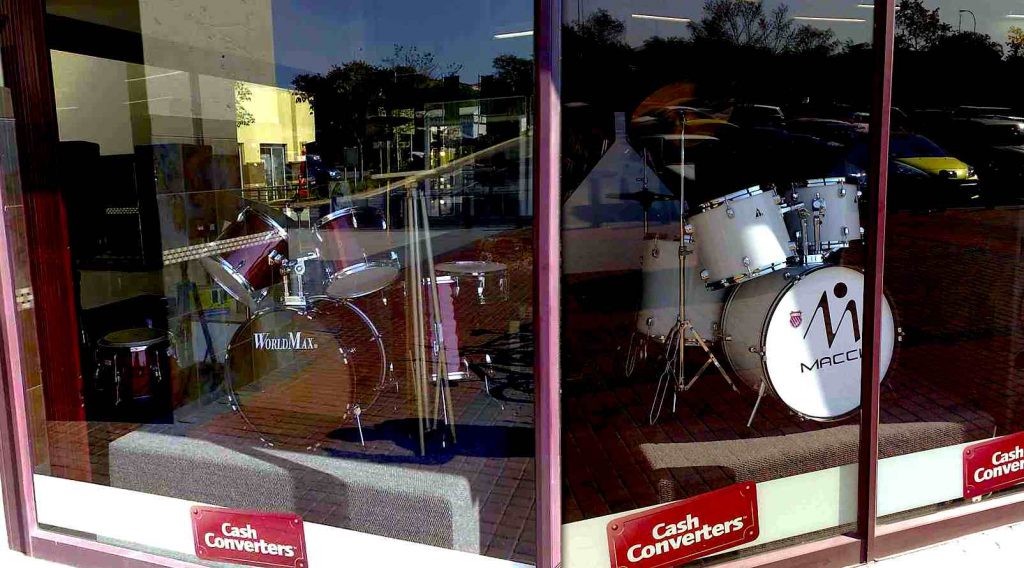 Drums: First thing to go in a recession.

Drumming takes practice, and no one’s practicing while their drums are in a second-hand store. At first I thought there might be a concert at Cash Converters; a kind of U2 on top of a building, but this time alongside reasonably-priced, but gravy-stained heaters. No such luck, the drums were on sale. Instead of hawking their stoves, people have resorted to discarding the one thing that might enable their ginger teenage kid to lose his virginity. Don’t blame him if he now has to become an ecstasy dealer to get laid.

Yes, drums are difficult to transport and are seemingly less-respected than saxophones. But everyone loved it when Phil Collins dressed as a gorilla in a rip-off of Bollo from The Mighty Boosh.

(P.S. Can anyone confirm the rumour that the Cadbury’s Gorilla was paid in chocolate, and is now not only homeless, but also diabetic?)

Let’s also remember that drums originated in Africa, and were often used for communication over long distances. Kind of like cellphones for the elders. But without Push-To-Talk capabilities. (Like that technology is ever going to take off.)

So if you’re considering ditching your drums just because the US bond market went sour, reconsider. Rather sell your fridge, security gates and that spare iron lung. We can’t afford to lose a John Bonham, Vinny Paul, Joey Castillo, Cadbury’s Gorilla, or (yes, fine, I’ll put him on the list) Lars Ulrich.

Then again, you can always create some soulful syncopation with nothing but your unsold kitchen utensils.